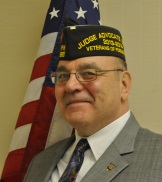 Mr. Burke served in the United States Army from 1966 to 1969. During that time, he served in the Republic of Vietnam with a variety of units. In recognition of his service, he received the National Defense Medal, the Republic of Vietnam Campaign Ribbon, and the Vietnam Service Medal with 6 Battle Stars, to name a few. He attained the rank of Sgt. during his service period.

At the National level, Hal has held many appointed positions to include the National By-Law Committee which he served on from 2005-2016.

Hal was elected National Judge Advocate General, Veterans of Foreign Wars of the United States, at the organization's 114th National Convention in Louisville, KY on July 24, 2013.

Hal was inducted into the New York State Veterans Hall of Fame on May 15, 2018.

He has received his Associates of Arts degree in Fire Protection Technology and Fire Science, as well as an Associates degree in Accounting.

Mr. Burke was a Safety Professional and retired after 38 years with Lockheed Martin Corporation retiring in 2005. He continues to maintain the financial records at his son Andrew business – ABs Automotive and Performance.

He is a member of the Disabled American Veterans, the American Legion, the Cooties and the Elks.  He has been a volunteer fire fighter from 1973 to 2016 when he retired.

Mr. Burke has been married to his wife Carol for 48 years and they have two sons, Harold III and Andrew and two grandchildren, Abigail, who is 4 years old and Theodore who is 2 years old.