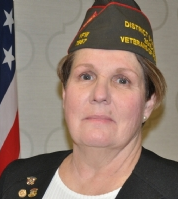 She is a Registered Nurse who retired from nursing after 31 years in August 2017. Her areas of nursing care were: neonatal, pediatric, cardio-thoracic, cardiac, medical, surgical and trauma/combat intensive care, recovery room, emergency room and operating room nursing. In addition, she was a lecture and clinical Nursing instructor at Niagara County Community College.

She retired from the US Army Reserves April 1, 2015 after 28 years of service as an Army Nurse Corps intensive care and operating room nurse.

Brenda enlisted in the US Army in 1975 as a UH-1 helicopter repairman and was stationed at Fort Richardson, Alaska. After leaving the Army for family matters, she re-entered the Army as a commissioned 2nd Lieutenant in 1987. She successfully completed officer basic, office advance, operating room nurse course, head nurse course and Command Staff and General school.

She qualified for the Veterans of Foreign Wars (VFW) with her first deployment to Tirkit, Iraq in 2007 with the 325th Combat Support Hospital (CSH) as an intensive care (ICU) nurse. During the deployment she was transferred to the US Air Force Level 1Trauma Hospital in Balad, Iraq as an ICU Charge nurse. Brenda deployed again in 2013 with the 48th CSH as the Executive Officer (XO) to Camp Arifjan, Kuwait.

In 2012, she was elected Jr Vice Commander of the Erie County Council (ECC). She held the position until her deployment and upon returning, elected ECC Commander. At the County Council level, she has held the positions of Trustee, Inspector, Voice of Democracy (VOD), Patriot’s Pen (PP), and Smart Maher Teacher Award Chairman. During this time period, she was also selected National Aide to Camp for three (3) consecutive years.

n 2015, Brenda was appointed District 6 Membership Chairman and moved through the elected chairs of Trustee, Jr Vice, Sr Vice and District Commander. As District 6 Commander, all three of the District’s County Councils earned 100% membership as well as the District. She has also held the appointments of District Inspector, VOD, PP and Smart Maher Teacher Award Chairman.

At the Department of New York level, Brenda has been appointed Chairman of Safety by Commander Marlene Roll, Patriotic Instructor of Commander Dennis Sullivan, Chairman of Community Service and Smart Maher Teacher Award by Commander Michael Burke. In addition, she was awarded for her assistance and support to fellow veterans and Community Service. In 2019, she was elected Department Surgeon.

At the National level, she was appointed as a representative of the Department of New York for committees such as bylaws, resolutions, and Women Veterans. In 2018, she was given a National appointment to the Bylaw committee.

Brenda is a member of the Military Order of the Cooties (MOC) Pup Tent 54and has held the elected position of Seam Squirrel (commander) for the last three (3) years. In addition, she is presently the elected Sr Vice Commander of the Grand of New York.

She is a life member of the VFW Auxiliary and a current member of the American Legion. In addition, she is a member of Toastmasters International and an officer of the Speak Up Toastmaster Executive committee in Batavia, NY.

Brenda presently resides in Akron, NY with her husband, Bruce of 28 years, also a VFW life member. They have four adult children and five grandchildren.